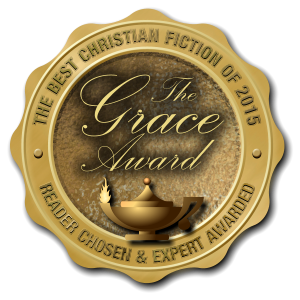 The Grace Awards, a reader driven awards and the most democratic awards in Christian fiction, now in its sixth year, is very proud to announce its 2015 WINNERS. This year we had an array of widely diverse judges (multi-published authors, traditionally published ones, indie authors, and avid readers). Our judges commented on how pleased they were with the high quality of the finalists chosen by readers this year. Several judging teams ‘complained’ they had trouble picking a winner because all three stories nominated were so good. This only serves to justify the faith we have in our Christian readers who nominate the finalists. That’s what the Grace Awards is all about.

We’ve tried to use, if you will, a separation of powers in choosing our winners. Readers nominated (via email) the finalists in six categories. After the nominations were counted, finaling titles were given to our judging teams. From that point on there was no contact between the judging teams and the Chair of the Board, except for administrative issues. The teams independently picked winners. Each step in the process was removed and separated from the next step, to insure impartiality.

We are thrilled that our winners showcase self-published works as well as titles from  publishing houses, ebooks as well as paperbacks. Our aim is to be an egalitarian award, and we believe we’ve accomplished this.

In ANNABELLE’S RUTH the author triumphs over the challenge of making a well-loved bible story fresh, and relevant to the era of 1950s Tennessee.  Expect to be transported to the small, rural town where Annabelle and her daughter-in-law, Ruth, must find a way to begin again after their husbands’ tragic deaths. Readers familiar with the book of Ruth will be left with a deeper appreciation of God’s provenance.

BRIDGE OF FAITH gives an inside look at American family life. It’s not perfect. And all the frayed ends don’t really get tied up in the end. These people are still flawed, but they love each other and aren’t about to quit believing. I wondered, more than once, Julia Connelly would ever wake up and realize what a gift she’d been given—a second chance at love. The reality is, we’re often filled with doubt and anxiety. We’re afraid to try again, because we know the pain of making a mistake. The judges thoroughly enjoyed the characters in this book. The author did a nice job of bringing them to life and giving them real and believable emotions. Their struggles were so real at times, we almost wanted to stop and pray for them. Yes, the judges supposed the idea of a rich, hunky lead returning to save our heroine from a lonely forever is a tad clichéd, but who cares? It was great fun. The only negative we found in Bridge of Faith, was our inability to put it down.

This novel grabs the reader’s attention from the start. The writing is crisp with a fresh and unique author voice. The pacing moves along fast enough to keep the reader hooked but not so quickly as to create confusion. In addition to the mystery/suspense plot, the reader gets a delightful look into the lives of Tess, her family, and friends. Written in first person, the point of view stays steadfast throughout the story except for the letters sprinkled throughout the book which give insight into the killer’s psyche. They do not, however, give away too much and spoil the whodunit reveal. Ms. Gilbert makes good use of red herrings, both with characters and even setting. Though it is obvious that this novel is a sequel, the reader is able to follow character relationships easily. TRIAL BY TWELVE  is a novel all three Grace Awards judges can recommend.

STORMING was a pleasure to read. It started with a bang and kept on delivering. It is a highly inventive story with just the right balance of unpredictability and universal appeal. The characters are especially well rounded, their humanity believable as each one’s troubled past was gradually revealed. The 1920s setting seemed well researched; the dialogue and colloquialisms were in keeping with the era, yet a natural feel was maintained throughout. ‘Steampunk’ elements added another dynamic to an already superbly built world, while masterful descriptions never weighed the story down. This book has it all: complex relationships, excellent pacing, wonderfully timed resolutions, and some surprising twists. It was not overtly Christian, but there were definitely elements of faith and forgiveness. It is highly recommended for anyone – readers looking for something different AND readers looking for something relatable. It truly has universal appeal.

Joan Deneve weaves a beautiful story of redemption and forgiveness in this Grace Awards winner. SAVING ERIC  combines intrigue and espionage into a story of learning to forgive and accept mercy. The characters, even the secondary, are believable, engaging, and compelling. Eric, who believes failure is not an option in his life, finds himself on the wrong side of a traitor in the midst of a failed mission. Critically injured, he’s flown to a remote hospital by his friend and helicopter pilot, Toby. Despite a strained relationship between Eric and his father, the scenes between them provide insight into Eric’s character. The growth of their relationship is realistic and touching. The spiritual aspect of Saving Eric felt credible. It portrays the power of redemption and God’s love.

TO GET TO YOU by Joanne Bischoff (Mason Jar Books)

JoAnne Bischof has brought a new dynamic to young adult fiction. Long after reading the last page of her novel TO GET TO YOU, the judges found ourselves thinking about her unique characters. This story of one young man’s quest to do well and to climb out of a lifestyle of hopelessness, to reacquaint himself with his father, and to help his girlfriend’s family will capture the attention of young adults—and others. So, I encourage you to take a road trip with Riley Kane. You’ll be glad you went along for the ride

8 thoughts on “Grace Awards 2015 Winners ~ in Faith Based Fiction”