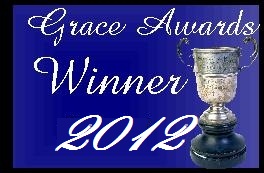 The Grace Awards, the most democratic awards in Christian fiction, is very proud to announce its 2012 WINNERS. This year we had an array of widely diverse judges (multi-published authors, first time published authors, writers who specialize in areas of publishing other than fiction, and in YA this year we had a youth expert who has an extremely popular family and educational blog).

In addition, we’ve tried to use, if you will, a separation of powers in choosing our winners. Readers nominated (via email) the finalists in six categories. An individual who is not an author and who doesn’t sit on the Board counted the nominations. Finaling titles were then given to our judging teams. From that point on there was no contact between the judging teams and the Chair of the Board, except for administrative issues. The teams independently picked winners. Each step in the process was removed and separated from the next step, to insure impartiality.

We announced a bit late this year because several teams had near ties for their winner. We’re very happy that the novels nominated by readers were that good!

We are thrilled that our winners include self-published works, titles from small houses, as well as from moderate and large traditional houses. Our aim was to be an egalitarian award, and we believe we’ve accomplished this.

HARVEST OF RUBIES was meticulously researched. Judges report reading was like viewing this tale from the Persian courts. We watched a spiritual journey with a wonderful resolution. The language used delighted the senses. The reader is caught immediately by the way the author made an ancient time period true to life. Human nature doesn’t change much, but their ways and mores change immensely. The author brought ancient Persia alive to readers who can be persnickety about authenticity. Sarah’s quandary is a captivating story problem — being different yet trying her best to fit in. Throughout, it was easy to care for the characters, Darius in particular. Extra kudos for historical authenticity, particularly useful to those who doesn’t read in this time-period by choice. Convincing and engaging, this is a book to savor and an author to watch.  ~~ Judges: Deborah Kinnard (Team Leader), Carol McClain, Christine Lindsey

BE STILL MY SOUL by Joanne Bischof (Multnomah Books)

BE STILL MY SOUL is one of those rare novels that makes a person forget she’s reading. Its little-used setting, the
Appalachian hills, springs to life, immersing the reader in its fragrant foliage, rough mountain trails, and harsh, unpredictable elements. For being so quiet and mild-mannered, heroine Lonnie Sawyer makes a bold imprint on the
reader’s heart and mind. It isn’t so much what she says, as what she doesn’t say. Author Joanne Bischoff is
to be commended for crafting a believable character who is at the same time humble and stalwart. Gideon O’Riley is, at first, dishonorable and detestable. To be worthy of sweet and forgiving Lonnie, much soul-changing is in order. Gideon is the epitome of Christ’s redemptive work. Brought full circle, Gideon makes a complete transformation that couldn’t be imagined possible at the outset of the book. Yet the author pulls it off in a way that prompts applause and has other authors taking notes on how to make an unlikeable character
someone to root for. All characters had realistic and relate-able spiritual dilemmas. The Christians were flawed and the unsaved had complex and understandable doubts. Pacing was appropriate. The story engaged without fail, and is without dispute a clear Grace Awards winner. ~~ Judges: April W. Gardner (Team Leader), Janalyn Voight, Marcy Dyer

WIND OVER MARSHDALE is a well-written novel with characters who feel like real people facing believable, real world problems. Each character grows in the course of the story, with strong faith elements playing a big part in the plot. The mystery element is very subtle yet the reader is carried along with the desire to see how it all ends. Romance is a key focus and provides a great deal of the intrigue and suspense, wondering who Rachel will choose. The plot points, background information, and development up to the climax and conclusion are well-handled. Rachel’s journey to salvation is refreshingly real and touching. Humor is interspersed, provided mainly by secondary characters. In short time, the reader expects Mrs. Beatry’s commentary, gossip peppered with a healthy dash of irony. Con’s grandmother is particularly delightful with her forgetfulness and bluntness wrapped up in love for family. The author carefully paints everything in the light of God’s grace and forgiveness. And most importantly, God’s timing – that not everything happens exactly like we plan. The struggle each character faces in their faith (or lack of) shows what it’s really like when we stray from following God’s will. The despair of separation from the Lord, the feeling of how can I ever get back, strikes a chord in the reader and reminds us that we need only ask forgiveness. ~~ Judges: Tammy Doherty (Team Leader), Debra E. Marvin, Suzanne E. Williams

DAYSTAR definitely touches a spiritual cord, while taking the reader on a fast paced adventure to unknown galaxies. Even at a daunting 650 pages, the story maintained a great pace and was engaging throughout. There was enough pseudo-scientific mumbo jumbo (which Sci-fi writers are famous for) to make the story seem plausible, yet not so much to overwhelm the reader. Her attention to detail was amazing (perhaps one reason for the length of the book) and her descriptions were very visual. Included in the book is a wide cast of characters that were very well developed and the story line was complex. There was romance, intrigue, sabotage – everything to make the book interesting. The book is a Biblical allegory, there is no doubt about that.  Although this was fairly obvious early on in the reading, there were enough surprises and imaginative ways of presenting the analogies, that it remained fresh and unpredictable. It was extremely well written and quite deserving of this year’s Grace Award for speculative fiction.

WALKS ALONE is a well written epic novel beginning in Holland and ending in the old west. Loved the way it opened with the tenderness of Anna’s father aboard ship. It was hard not to I get involved in the father’s dream of traveling to Denver City. The scenes in New York City with Anna’s uncle were brutal and fully engaging. After Anna escapes her uncle, travels westward by train, and finally joins a wagon train where she’s not well treated, there is a captivating bathing scene in the river where she allows herself to relax. When half-breed Jean-Marc comes upon her with a small band of angry-braves, the reader is caught between instant knowledge of the hero’s strong attraction to her and fear for the extreme danger she’s in. Ms. Rog understands Native American life in that era quite well. She did an excellent job of showing the anger and murderous rage of the braves as well as the prejudice of the settlers and their inability to see Native Americans as people, which led to Indian massacres. Both Anna/Walks Alone and Jean Marc/White Eagle are flawed and well written. White Eagle’s poetic declaration of how his love is so large and encompassing that he sees and hears Walks Alone everywhere, even in the wind, was superb. He tells her of his pain at having caught her engaging in conversation with his sworn enemy, the man who led the deadly raid against his tribe. Through this, the author conveys how painful it is for Father God to witness His children engaging with idols. Beautifully done. Touches the reader at a deep spiritual level. ~~  Judges: Nike Chillemi (Team Leader), Krisi Keley, Kenneth Winters

CROSSOMG THE DEEP fully entices from the alluring cover design to the last page, Ms. Martin has constructed an engaging, age-appropriate story which will keep the readers captivated throughout the book. Rachel Harker joins a church youth group retreat with her close friend and other teens.  During a hike in the Smoky Mountains, she makes a brief diversion from the trail, which unfortunately for Rachel, results in some devastating consequences.  What began as a breezy hiking activity turns into a struggle for survival.  Rachel and her friends find themselves stranded in a cold, rainy environment and must prepare themselves for the possibility of animal attacks, exposure and eventually, despair.  Their faith, endurance, and friendship are tested to the maximum as they desperately search for the “right path”. The characters were realistically portrayed and much is learned along the way about certain events which influenced their lives.  Faith in God is a point of contention for the characters along with an abundant share of twists and surprises.  Despite the challenges facing the characters, readers will find themselves cheering the teens on to victory. This is a well-written tale which readers of all ages will enjoy and appreciate.  Congratulations to Kelly Martin for creating such a marvelous, character-driven story.  ~~  Judges: Tracy Krauss (Team Leader), Shaunna Gonzales, Tim Akers

19 thoughts on “Grace Awards 2012 Winners – in Faith Based Fiction”